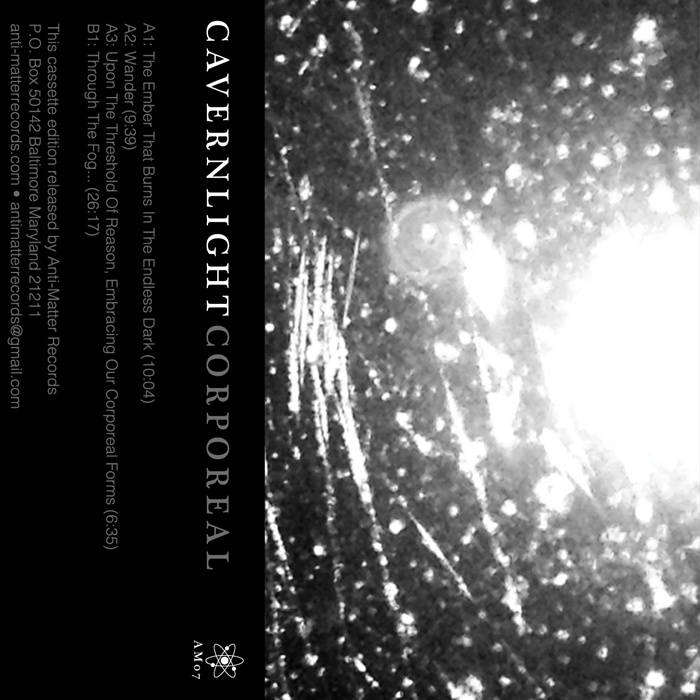 P.L. Bertlein I always appreciate a band that gives a bandcamp download with an album. It speaks of sincerity, which is what this band is all about. Favorite track: The Ember that Burns in the Endless Dark.

Cavernlight is an effort based firmly on the concept of self-reflection and self-discovery through means of total sonic catharsis. By gathering individual powers and combining visceral energies, those involved strive to attain clearer mind and expanded vision. A search for the ability to find realization and truth in things otherwise obscured by the oppressive nature of daily existence.

Although in its current form Cavernlight is yet in an infancy, the personal and creative bonds that connect its individual members trace back over fifteen years. Shared experiences and life paths motivate these four voices that call out in unison. This debut recording, Corporeal, is the sound of those voices drawing on past experiences exploring doom, noise, drone, electronic, and black metal. The past lends its knowledge and wisdom to help chart a course for this new path, one that travels through shadowy groves into valleys of dense fog. Into places of a brooding darkness touched by angst and suffering.

Corporeal will be released by Anti-Matter Records on cassette, limited to 100 copies. It was recorded live by Tony Rossi in the summer of 2014, mixed by Surachai, and mastered by Adam Tucker. The j-card is printed on uncoated stock and features photography and prose from the voices of Cavernlight. A download code is included.

Here is to the ember that burns in the endless dark. Only through loss can its light be seen. Many doorways stand open to those that dare to cross the threshold.

Recorded, mixed, and arranged from May to November of 2014 by Tony Rossi in Oshkosh, WI.
Mixed by Surachai, except for “Wander” which was mixed by Tony Rossi
Mastered by Adam Tucker

“Through the Fog…" was created using the final master of Wander, which was then manipulated by A // B and S // B

For lyrics, please talk to us in person or contact us via email at cavernlightnoise@gmail.com.